For many years now, Lympstone Entertainments has been displaying poetry on its poster boards, when there isn’t a forthcoming event to advertise. It doesn’t seem that we will have another performance to announce for some time, and so we will fill our boards with an ever-changing selection of poems in the intermission.
In addition to our posters, we started posting poems on this website when we were told to isolate ourselves. Here is one form of human contact that doesn’t breach the Government’s guidelines.
In times of crisis, we often turn to poetry. To console us, to cheer us up, to make us laugh, to relieve our boredom, to express our fears and sadness, our hopes and our happiness, our friendship and our love, of each other and the world we live in.We have the whole of world literature to choose from, and poetry is as old as civilisation itself. In 1349, the year of the Black Death, people carved poems into the stone walls of church towers. Today we are posting them on our website. In both cases they tell us, in rhythm and in rhyme, of the way things were – and of the way they are. And of how we feel, in good times and bad.
We invited you to suggest some of the poems, and have beenthrilled by your enthusiastic response. If your poem hasn’t yet appeared, never fear, it will. And please keep your suggestions coming, of poems and of good song lyrics.
. With your help, we have posted a new poem or lyric every day for the last sixty days! With live performances still not possible, and no end in sight to this situation, we have decided to put up a Weekend poem instead of a daily one.
For December, we put up a poem a day, to celebrate the season. In 2021 we are putting up poems to celebrate significant days.
This September we are putting up four poems  in tribute to John Eaton-Terry, one of our founder members, who died recently.
Harland Walshaw

Please send your suggestions to:
contact@lympstone-entertainments.net
The poems are listed below as pdfs, but please send your poems or lyrics as a word document.

Next poem – soon!
September 2021 Toad of Toad Hall, Shakespeare and Ben Jonson talking in the Mermaid Tavern, The bookshop opened by John Eaton-Terry and It is not growing like a tree
May 23 Shakespeare’s birthday Be not afeard by William Shakespeare
Good Friday from Four Quartets by T.S.Eliot
April Fool’s Day April is the cruellest month a parody by Henry Reed – listen to Dylan Thomas reading Chard Whitlow as T.S. Eliot
March 20 Dear March.by Emily Dickinson
March 13 Mother’s Day 2021
February14 Valentines Day Another Valentine by Wendy Cope
February 13 Tomorrow and tomorrow and tomorrow. by William Shakespeare
January 25 Burns’ Night Address to a Haggis by Robert Burns – watch and listen to Harry MacFadyen adrressing a haggis
January 5 2021 The journey of the magi byT.S. Eliot – listen to  Sir AlecGuiness reading this poem
January1 2021 Happy New Year!
Year’s Eve Auld lang syne by Robert Burns
Christmas Day On the morning byJohn Milton
Christmas Eve Christmas Eve by Patricia Beer
December 23 fr xmas’ text msg by Mike Harding
December 22 What the donkey saw by U.A. Fanshawe
December 21 The shortest day by Susan Cooper
December 20 Shepherds by Ralph Rochester – see the review of his book Estuary Poems on this page
December 19 In the week when Christmas comes by Eleanor Farjeon
December 18 Christmas landscape by Laurie Lee
December 17 The gardener at Christmas by U.A. Fanthorpe
December 16 The minstrels by William Wordsworth
December 15 The Christmas tree by C.Day Lewis
December 14 A Christmas card poem by U.A.Fanthorpe
December 13 Christmas candles by Clive Sansom
December 12 A robin by Walter de la Mare
December 11 The fallow deer by Thomas Hardy
December10 Winter by William Shakespeare – listen to Cleo Laine’s recording of the Johnny Dankworth setting
December 9 Stopping by woods by Robert Frost – listen to him reading his poem
December 8 A winter night by William Barnes
December 7 Under the mistletoe by Countee Cullen
December 6 Mistletoe by Walter de la Mare
December 5 Holly red and mistletoe white by Alison Uttley
December 4  Holly by Seamus Heaney
December 3 They’re fetching in holly and ivy by Charles Causley
December 2 Christmas Wise by Benjamin Zephaniah – listen to him reading his poem
December 1 The Christmas Life by Wendy Cope
Weekend 28 November We’re busy doin’ nothin’ by lohnny Burke/Jimmy Van Heusen –  singalong with Bing, William and Cedric
Weekend 21 November Conker by Robert MacFarlane
Weekend 14 November November by Thomas Hood
Weekend 7 November Puppy and i by A A Milne
All Hallows’ Eve One need not be a chamber -to be haunted by Emily Dickinson
Weekend 24 October The walrus and the carpenter by Lewis Carroll – read by Sir John Gielgud
Weekend 17 October From Auguries of Innocence by William Blake – read here by Roy Macready
Weekend 10 October The garden by Louise Glück
Weekend 3 October Everything is going to be all right by Derek Mahon-  listen to him reading his own poem
Weekend 26 September Winken, Blinken and Nod by  Eugene Field
Weekend 19 September The High Hills by Ivor Gurney
Weekend 12 September Pied Beauty by Gerard Manley Hopkins
Weekend 5 September Something told the wild geese by Rachel Field
BH Weekend 29 August The Lake Isle of Innisfree by W B Yeats
Weekend 22 August I sing of Brooks by Robert Herrick
Weekend 15 August At Lord’s by Francis Thompson
Weekend 8 August  Haymaking by EdwardThomas
Weekend 1 August The Listeners by Walter de la Mare
Weekend 25 July The way through the woods by Rudyard Kipling
Weekend 18 July Come on into my tropical garden by Grace Nichols
Weekend 11 July A Mayde ther was by Stanley J.Sharpless – listen to John Betjeman reading A subaltern’s lovesong
sWeekend 4 July Poet to blacksmth by Seamus Heaney
Midweek 1 July Dover Beach by Matthew Arnold
Weekend 27June The lion and Albert by Marriott Edgar – listen to Stanley Holloway
Midweek 24 June Fox by Alice Oswald
Weekend 20 June still here by Langston Huhes
Midweek 17June Recipe for a salad by Sydney Smith – do try the recipe, and send us your thoughts!
Weekend 13 June i opened a book by Julia Donaldson
Midweek 10 June Golden slumbers kiss your eyes by Thomas Dekker
Weekend 6 June I wish I knew by Billy Taylor and Dick Dallas – listen to Nina Simone live in Montreux in 1976
Midweek 3 June O, Mistress mine by William Shakespeare
Sunday 31 May The Ryme of the Ancient Mariner by Samuel Taylor Coleridge with Introduction by Harland Walshaw
30/05 i leave this at your ear by WS Graham
29/05 The little green orchard by Walter de la Mare
28/05 Mother to son by Langstone Hughes –listen to Hughes reading his poem
27/05 Waterloo sunset listen to Ray Davies and the Kinks live in in 1970
26/05 From Porthmeor Cemetery, St Ives:Alfred Wallis’s tombstone by Jack Clemo
25/05The Horses by Ted Hughes
24/05 Overheard on a salt marsh by Harold Monro
23/05 The glory of the garden by Rudyard Kipling
22/05 The symbolism of ancient sweaters by Gwyneth Lewis
21/05 Going – poem by Ian House with linoprint by John Jones
20/05 Sonnet: to the River Otter by Samuel Taylor Coleridge
19/05 From joy’s loveliest ocean by Rabindranath Tagore
18/05 Cormorant by Ralph Rochester
17/05 Somewhere over the rainbow – sung by Judy Garland
16/05 Friendship by Micheal O’Siadhail
15/05 Poem of the one world by Mary Oliver
14/05 Salutations to a mouse by Marsden Hartley
13/05 The railway children by Seamus Heaney
12/05 I know why the caged bird sings by Maya Angelou
11/05 Under Milk Wood by Dylan Thomas – read by Richard Burton or Dylan Thomas
10/05 A serious poem by Roger McGough
09/05 Saturday.by Joe Richards
VEDay -75 years Everyone sang by Siegfried Sassoon
07/05 Haiku
06/05 The Lympstone earthworm by Lympstonians
05/05 No man is an island by John Donne – read by Helen Mirren
04/05 The gardener by Robert Louis Stevenson
03/05 Old friends by Paul Simon and Art Garfunkel – singing here
02/05 I have decided by Mary Oliver
May 1 Hares at play by John Clare

30/04 Rainbows by William Wordsworth
29/04 Silver by Walter de la Mare – listen to the poem set to music by Armstrong Gibbs with Sarah Walker and Roger Vignoles
28/04 Benediction by James Berry
27/04 April’s charms by William Henry Davies
26/04 Home thoughts from abroad by Robert Browning – close your eyes and listen to the birdsong
25/04 A poem for troubled times by Alexander McCall Smith
24/04 We shall overcome – sung here by Joan Baez
23/04 Sonnet 116 by William Shakespeare –  read by Juliet Stevenson
22/04 The World is too much with us  by William Wordsworth
21/04 Mothers by Christina Rossetti
20/04 Hail Madam Jazz by Micheal O’Siadhail
19/04 Fern Hill by Dylan Thomas – listen to Richard Burton
18/04 Loveliest of Trees by A. E Housman
17/04 Daffodils by William Wordsworth
16/04 I remember I remember by Thomas Hood
15/04 Gus the Theatre Cat by TS Eliot read by Nigel Goodwin at Lympstone Concert 2020
14/04 The Cherry Trees by Laurence Binyon
Easter Monday Mum by Simon Ellis
Easter Sunday Easter Zunday by William Barnes
11/04 And the people stayed at home by Kitty O’Meara
Good Friday Easter Wings by George Herbert
08/04 Smiling is infectious by Spike Milligan
08/04 Moon River by Henry Mancini and Johnny Mercer- dream along with Audrey Hepburn
07/04 Considering the Snail by Thom Gunn
06/04 This the time to be slow by John O’Donoghue
05/04 i whistle a happy tune by Richard Rodgers & Oscar Hammerstein II  – whistle merrily with Deborah Kerr
04/04 The Peace of Wild Things by Wendell Berry
03/04 The Trees by Philip Larkin
02/04 Blow the Wind Southerly – lyrics – listen to Kathleen Ferrier 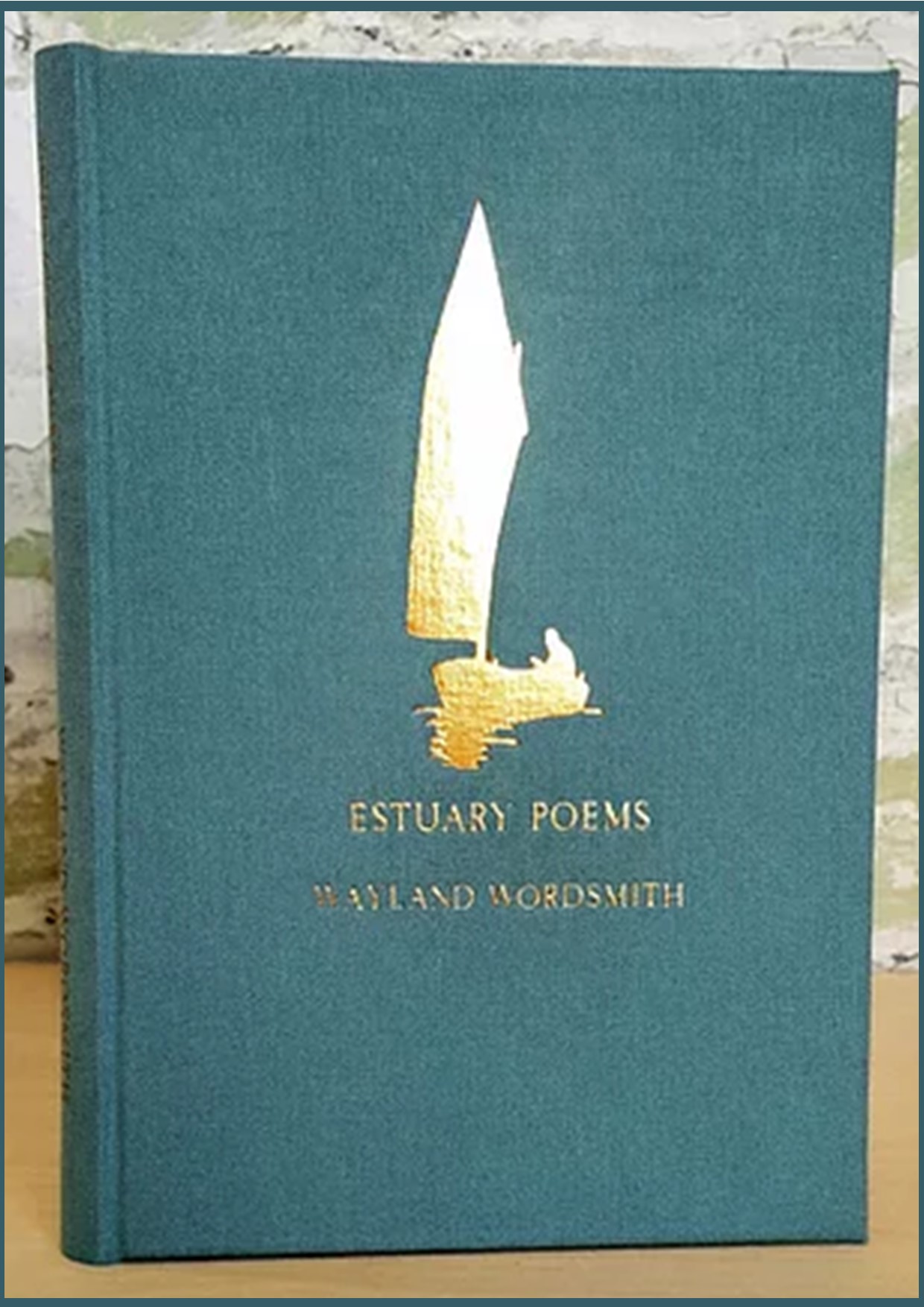 Priceless poems
Estuary Poems by Wayland Wordsmith
A newly-published collection by a Lympstone author
Published by The Hanbury Press
Wayland Wordsmith, the writer of a blog of that name, is no other than Ralph Rochester, a long-time resident of Lympstone who has now moved out of the village.
This new collection of some 60 of his poems is a celebration of living in Lympstone and of the Exe estuary. It’s a wonderful collection of observations about life by and on the water, of boating and fishing, of birds and people, of stories and humour. As the author Tom Fort writes, Wayland Wordsmith is:
“a poet, a historian, an antiquary of the old kind, a sailor, a fisherman, an explorer, a lingerer over sunsets and dawns…a philosopher and a gifted writer of a terrific blog.”
This small book might sound pricey at £34 – even perhaps at the £24 for which it is discounted to anybody in Lympstone or associated with the village. But it is such a beautiful object, a hand-sewn hand-bound pleasure to hold in your hand, a little work of art in itself, satisfyingly tactile in a world of digital screens, with its gold-embossed cover and perfect typography – that is what you are paying for: the poems themselves are priceless.
Harland Walshaw
To buy Estuary Poems at the specially discounted price of £24 (+p&p) our readers should go to www.hanburypress.co.uk and quote the code ESTLYM