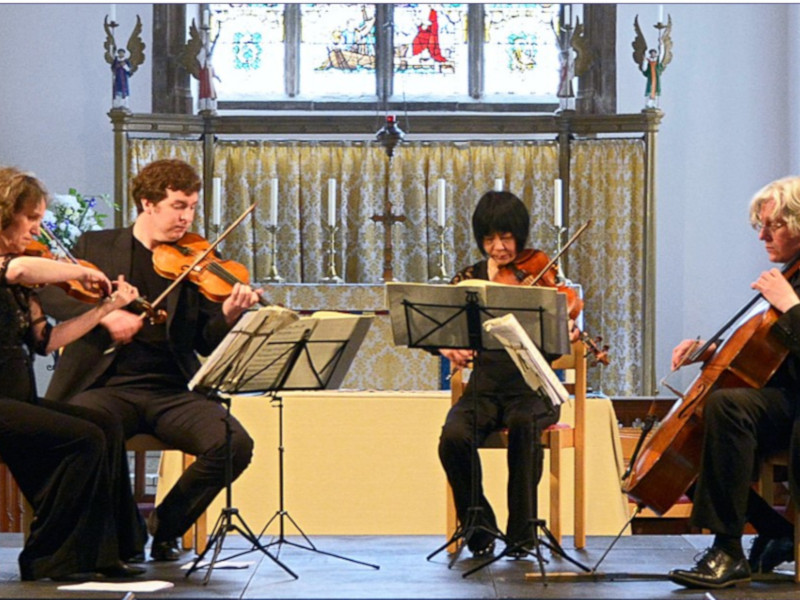 The Dante Quartet returned to Lympstone to play Haydn, Debussy and Szymanowski.

Of all Lympstone Entertainments events, the Dante Quartet playing the whole cycle of Beethoven string quartets in 2017 was undoubtedly the highlight. Over 1,000 people came to those concerts, and were thrilled by the playing of Krysia Osostowicz, Oscar Perks, Yuko Onoue and Richard Jenkinson.

Since they performed in Lympstone church two years ago, the Dante Quartet have been busy. They have given several more performances of ‘Beethoven’s Quartet Journey’, which had its debut in our village, have performed a marathon weekend of all 15 of Shostakovich’s quartets, and undertaken a tour of Japan. Later this year they will be playing in China for the first time, and are planning another Dante Festival in Cornwall in July.

They returned to Lympstone on 7th June this year, to play a single concert, with a programme of three wonderful quartets from the 18th, 19th and 20th centuries:

Joseph Haydn is known as the Father of the String Quartet. He wrote 68 in all, and the six that are catalogued as Op. 76 are held to be amongst the very best. Op. 76 no. 5 is particularly famous for its long slow movement, a melancholy-beautiful melody that is often played at memorial services (hence the quartet’s nickname, ‘The Graveyard’).

Claude Debussy, the great French composer whose music could be heard everywhere last year on the centenary of his death, wrote only one String Quartet, Op. 10 in G minor, but it is one of the most-loved of all. The music has often been compared to the paintings of the French Impressionists who were his contemporaries.

Karol Szymanowski is the best-known Polish composer after Chopin. He wrote symphonies, concertos and operas, but only two string quartets. String Quartet No. 2 Op. 56, written in 1937, begins in the classical style, but the 2nd and 3rd movements take their melodies and their rhythms from the highland folksongs of Podhale, including the brigands’ tune ‘Pocciez chlopcy’. The quartet closes with chords reminiscent of Zakopane folk bands, to which Szymanowski had for years been listening with great enthusiasm.