Drumbeat has been the voice of Lympstone Entertainments for the past dozen or more years, drumming up audiences and celebrating our events.
Our email newsletter was conceived, founded and for many of those years written and designed by John Eaton-Terry, who died last month.
John had acquired his skills as a publicist as a young man, working for Bernard Miles at the Mermaid Theatre in London’s Blackfriars. He also designed our posters, and gave us an identity, so that people could instantly recognise the publicity for one of our events, which they would know to be a professional performance of very high standard.
As part of that identity, John wanted a logo, and he chose an image of a Punch and Judy show from the King Penguin Book of Folk Art. The drummer standing in front of the booth, attracting an audience when the show was about to begin, gave him the idea for the title of his newsletter, and John imitated the seaside colours in his text and layout.
Deb Mitchell made him a Punch and Judy booth, and John can be seen here selling tickets from it at the 2009 Mediaeval Fayre to celebrate the 600th anniversary of the church tower, with the logo below and Hazel beside him.

As a member of the quartet who devised the programme of events for Lympstone Entertainments, John saw it as his role to make sure we presented as much theatre as possible.  As a result, we have staged some extraordinary productions, such as I’m An Aristocrat, Get Me Out of Here (about the French Revolution) and Those Magnificent Men in their Flying Machines (Alcock and Brown), performed by professional touring companies like Gonzo Moose.
As part of his publicity strategy, John established four permanent A3 poster sites in the village. When he wondered what he should put on the boards in between events, we agreed that poems would make a wonderful contribution to village life. Our poetry posters were celebrated in the Guardian by the novelist Jane Gardam, who was inspired to put up her own in her home town of Sandwich.
Another of John’s great loves was French chansons. (He and Hazel took a long touring holiday in France each year.)  It was John who found us Piafinitée, an evening which celebrated the ‘Little Sparrow’.
Sitting with Hazel in the village hall at a café table, a glass of French wine in his hand, listening to the songs of Edith Piaf – well, John had no regrets.
Harland Walshaw 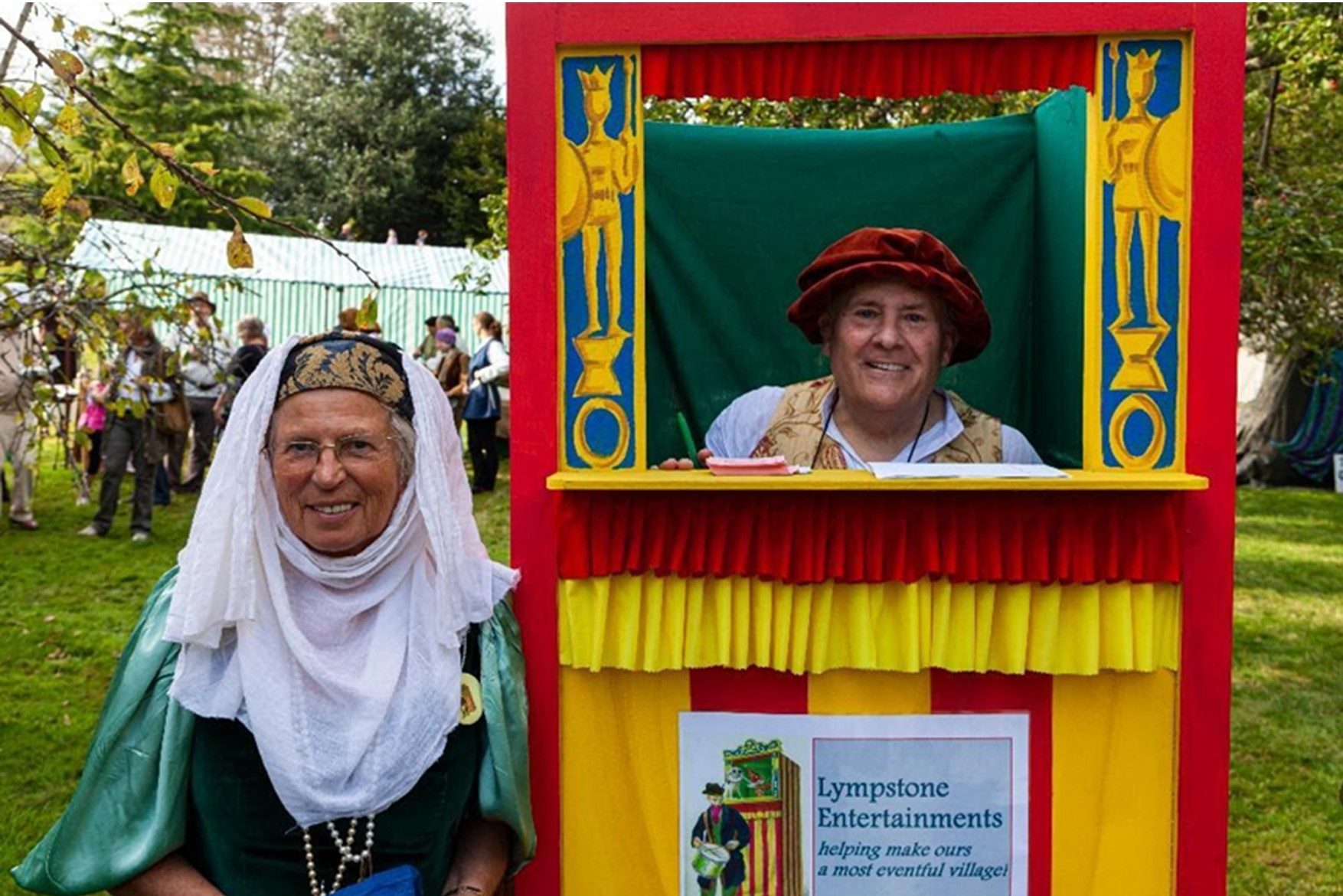 In Memory of John Eaton-Terry
John Eaton-Terry, who was such an important figure in Lympstone Entertainments for many years, died in August. It was John who conceived and erected our poster boards, which we use for poetry posters when we are not advertising an event. To celebrate John’s contribution to the arts in Lympstone, we have been displaying four appropriate poems, and now they move to our poetry website, Poems in Isolation.
The Song of Toad remembers John’s celebrated comic performance in the Player’s production by Barbara Neason of Toad of Toad Hall.
In the Mermaid refers to the time that John worked for Bernard Miles as a publicist for the Mermaid Theatre.
I Opened a Book reminds us that John and Hazel opened a bookshop in the Strand when they first came to Lympstone in 1973.
It is not growing like a tree is the Ben Jonson poem that John suggested for one of the first four poems to appear on the Poetry Boards.