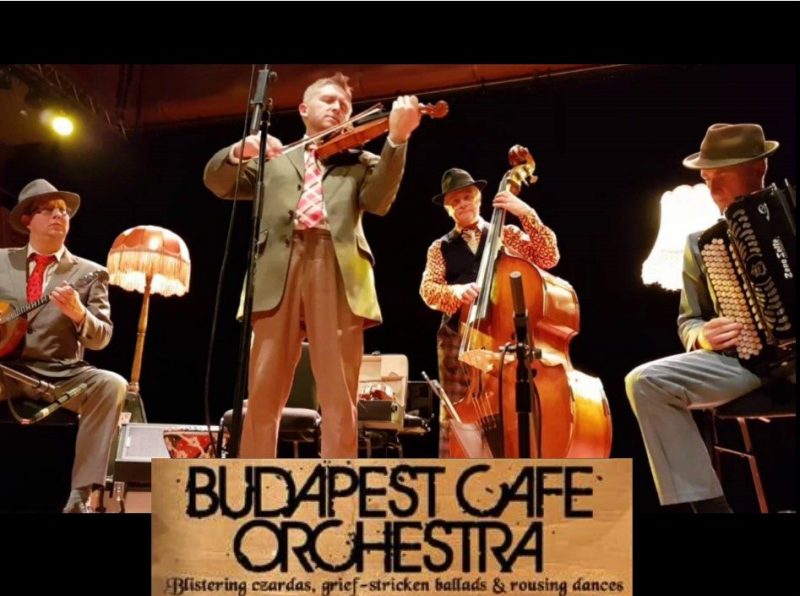 Lympstone welcomes back with open arrms the Budapest Cafe Orchestra, who delighted audiences here back in 2018.

The Budapest Cafe in their own words

The BCO is a music-driven phenomenon, a specialist performance-entertainment outfit, certified to enthral audiences everywhere. The infectious energy of the BCO will sweep you off your feet and stay in your heart forever. You will journey from one emotional pole to another: from a desperately tragic evocative heart-rending ancient Jewish melody to a dance from Romania or Russia and all the fiery exuberance that goes with it.
The Budapest Cafe Orchestra share as many blood cells with the folk of Hungary as the Penguin Cafe Orchestra do with the web-footed fellows of Antarctica. Their Magic Potion is a closely guarded recipe of malt, hops, yeast and water, handed down in the secret tongue of Estuary English through generations of Professional Gypsies. With a sole mission:to entertain and enchant audiences, they are undaunted by even the most demanding and wildest village hall crowds, for example those inhabiting the darkest corners of Warwickshire. 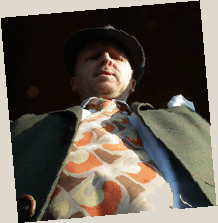 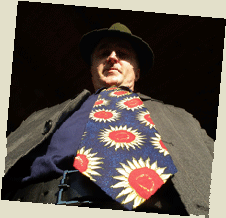 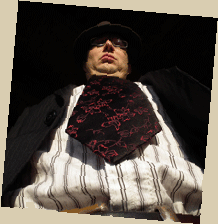 The members of the Orchestra

the best spoken professional gypsies West of the Danube…

Balkan Bob (violin, doumbek) Brain cell behind the resurrection of the Orchestra. A single whiff of paprika was all it took to revive the old penchant for a bit of badly made goulash and a dusty village hall. The principle violinist of the Orchestra also dabbles in darbuka, an ancient instrument of Arabic, Assyrian and Persian origin, believed to have been invented before the chair. Peddler of finest racing hair tricks and freshly harvested chillies.

The Dragon (button accordion) Former supreme accordion champ of GB and accompanist of choice to none other than Pavarotti. Slave only to bakewell tarts, Battenberg cake & Man U, the Dragon is otherwise in full charge of his formidable facility on the most ridiculous of instruments. Highly regarded for his rendition of the Captain Pugwash theme.

Kelvin the Klaw (big daddy violin) An original & founding member of the BCO, Kelvin is a true Hemel Hempstead gyspy and is to be found herding goats there. His double bass is made from bits of timber from old goat sheds. He only performs with a portrait of the Queen behind him. Kelvin maintains his conviction that Ferraris are modelled on his old mark II red cavalier.

The Sultan (saz, guitar, balalaika) Has a vaguely legitimate yet entirely spurious claim to true Gypsy status having, as he does, a modicum of actual Russian blood in a small vial on his living room shelf. A native of Overton in Hampshire he knits his own underwear and is a regular on Talk Radio’s Phone-ins.